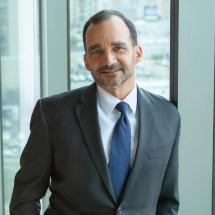 Michael Collins is a principal with Manier & Herod, practicing in the areas of bankruptcy law, business recovery, trusteeships / receiverships, surety law, and commercial litigation.  Mr. Collins brings to each engagement a unique blend of legal and financial advisory expertise for the benefit of his clients.  Mr. Collins is AV Preeminent® rated by Martindale-Hubbell, meaning that Mr. Collins’ peers rank him at the highest level of professional excellence in the practice of law.
Mr. Collins’ legal background encompasses many different roles.  He is a Certified Business Bankruptcy Law Specialist by the American Board of Certification.   He is a former Assistant U.S. Trustee for the U.S. Department of Justice with over 20 years of litigation experience.  Over the course of his career, he has regularly represented debtors, creditors, trustees, and receivers in federal and state courts throughout the United States, and internationally including many “mega” bankruptcy cases (e.g., WorldCom, K-Mart, F Genon Energy, Inc., ITT Tech, Inc., PES Holdings, LLC, Payless Holdings LLC, SunEdison, Inc., Peabody Energy Corporation, Isolux Corsan, and Abengoa, S.A).

Mr. Collins’ financial advisory background is extensive.  He is a Certified Insolvency and Restructuring Advisor (CIRA) by the Association of Insolvency and Restructuring Advisors, and received the Kroll Zolfo Cooper / Randy Waits CIRA Bronze Medal for achieving the third highest score nationally on the CIRA examination for 2006.  He was formerly a business recovery consultant for PricewaterhouseCoopers, LLP, providing bankruptcy-related financial advisory services to a diverse set of companies, including Federal Mogul Corporation and Enron Corporation.

Mr. Collins’ educational background includes a J.D. from Samford University and an M.B.A. in Finance from Vanderbilt University, graduating with honors in both curriculums.  Mr. Collins also has a B.A. in Economics from the University of Tennessee, Knoxville. Mr. Collins has been selected as a 2018 Mid-South Super Lawyer in the area of bankruptcy.

Mr. Collins is an active member of the Nashville community.  He is a Past President of both the Mid-South Commercial Law Institute and the Sertoma Club of Nashville.  He is a former Chairman of the Bankruptcy Court Section of the Tennessee Bar Association.  He is active in the Association of Insolvency and Restructuring Advisors, the Turnaround Management Association, and the American Bankruptcy Institute.